Langtang Gosaikunda Pass Trek is a long and adventurous journey embraced with pristine holy and spiritual lakes, demanding uphill and downhill climbs, exposure of lifestyle and culture of nomadic and indigenous people, jaw-dropping panoramas of the Himalayas in the backdrop, cascading waterfalls, lush bushes, and a lot more. Over the years, the trail is mostly bursting with pilgrims visiting the divine Gosaikunda Lake, either they are fellows of Hinduism or Buddhism. With the discovery of high altitude passes and ridges like Kyanjin Ri (4,600m), Tsergo Ri (4,985m), Langsisha Kharka (4,100m), Lauribina Pass (4,610m), and so on, the trail has become a topnotch choice for adventurers as well.

Langtang Gosaikunda Pass trek commences with a picturesque drive up to the traditional and culturally enriched Syabrubesi village. Syabrubesi is the gateway to any treks to the Langtang Region of Nepal where resides various folkloric groups like Tamang, Sherpa, and Gurung; mostly inspired by the Tibetan lifestyle and culture. Walking ahead thru bushes and alongside the river, enjoying the picturesque sceneries of the cascading hills, snow-clad peaks, and the blooming of Rhododendron forest as well as several other species of vegetations, we will crawl our way to Kyanjing Gompa which is the last settlement along the trail before heading towards Gosaikunda.

To add a bit more adventure and excitement, the trekkers could choose to hike up to one of the ridges among Kyanjin Ri, Tsergo Ri, or Langshisha Kharka on the acclimatization day. All of them are unbelievably astounding viewpoints to sight the delightful sceneries of natural blissfulness. We will feel blessed with never seen before panoramic views of mountaintops like Langtang Lirung, Dorje Lakpa, Ganesh Himal, etc; a truly heavenly experience. Then we follow the same route through Lama Hotel to Thulo Syabru and head east towards the pilgrimage site of Gosaikunda.

Gosaikunda Lake and the myth

There are several other trivial lakes viz. Saraswatikunda, Bhairav Kunda, and others nearby Gosaikunda. There is a myth that Lord Shiva himself built Gosaikunda with his trident to get relief from the poison that he put into his throat to save the world from its severe consequences. Then we pass through Lauribina pass, Ghopte, Melamchi Gaon, Tarkeghyang, Seramanthang, and Melamchi pul bazaar for the next couple of days before driving back towards Kathmandu.

In the interim, we will be blessed to take a closer look at the dwindling herbs, vegetation, and wildlife, and birds in the Langtang National Park. The national park was a delimited area prior to the 19th due to security threats from the neighboring nations. And to enhance the preservation of endangered species, it is a protected area that is allowed to visit only with a special permit from the Government of Nepal.

Besides, the remote and rural lowland settlements and the authentic lifestyle of the locals are the major attractions of Langtang Gosaikunda Pass Trek. Ancient and historical monasteries, prayer flags, and other Buddhist cultures representing arts and monuments will rejoice you during the tiring uphill and downhill climbs. In a short duration of time, you can explore all these and reach the highlands.

Langtang Gosaikunda Pass Trek is appropriate for those about to tackle all the challenges and loves exploring with adventures. A long hour of walk through the narrow and cosy off-the-beaten trail on the high altitude is not a joke at all. One should possess previous experience of trekking along with proper physical fitness and regular exercising routines in order to go for Langtang Gosaikunda Pass Trek. As well as, a highly experienced professional trekking guide is also mandatory for this trek. Nepal Mountain Trekkers involve a team of guides belonging to that region and are highly experienced as well as licensed by the Government of Nepal.

There are no boundaries of time for embarking on Langtang Gosaikunda Pass Trek but for the proper trekking experience and achievement of satisfaction, we recommend trekking in the months of autumn or spring. It is because of the favorable weather, vivid sceneries, and blossoming of flora and fauna, especially Rhododendron.  As well as, during winter and rainy seasons, the trail gets more complicated as well as cold and slippery.

If you are still curious about anything or have any questions or queries about Langtang Gosaikunda Pass Trek, please do not hesitate to contact us. 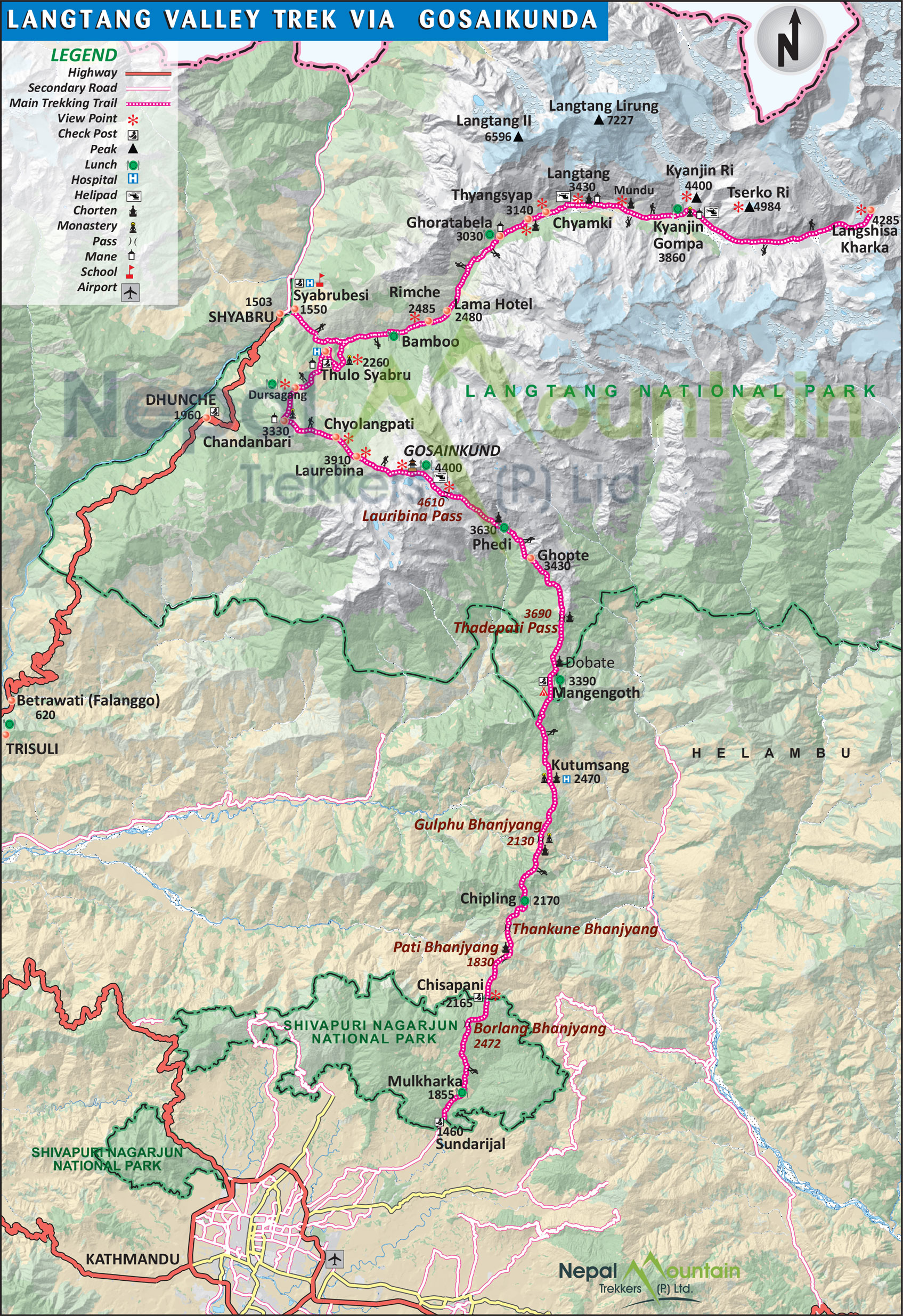 Medicines: We recommend you to bring your regular medicines; we will provide first aid kit from our side.
Light-weighted Towel
Swiss Knife
Passport and extra passport photos
Water Purifying Iodine Tablets, Drop or Sterilizer

It was already my another trek organized by Nepal Mountain Trekkers. Since arriving in Kathmandu we felt well taken care of, we had a shuttle service to the hotel. We stayed at Horizon Hotel, quiet and beautiful place for Thamel. When we sightseeing Kathmandu, everything was prepared to trek (permits, transport etc). This time our guide was Shiva who is profesional guide with a wealth of local knowledge. We could "only" enjoy our trip as we were sure that everything was well organized. I would definitely recommend Nepal Mountain Trekkers with frendly pofessional owner Ramesh Dhakal and wonderful guide Shiva and Daljit. Thank you so much Ramesh, Shiva, Daljit, Devaraj, Dhane, Sudip, Arjun. Hope to see you again ... soon :)

In november 2015 we met Mr. Ramesh Dhakal and our guide Daljit at the Horizon Hotel in Thamel Kathmandu. They are very friendly persons, like friends and we went on tour with Daljit and my husband, so we were three of us. We were 3 weeks on tour and had a great time with our guide. The lodges and whole trip was very good organized and with Daljit we had the advantage to learn a lot about Nepal and the Nepali's. We went in the houses, enjoyed family life and he showed us the most beautiful spots.We can recommend this organisation 110%. Enjoy!