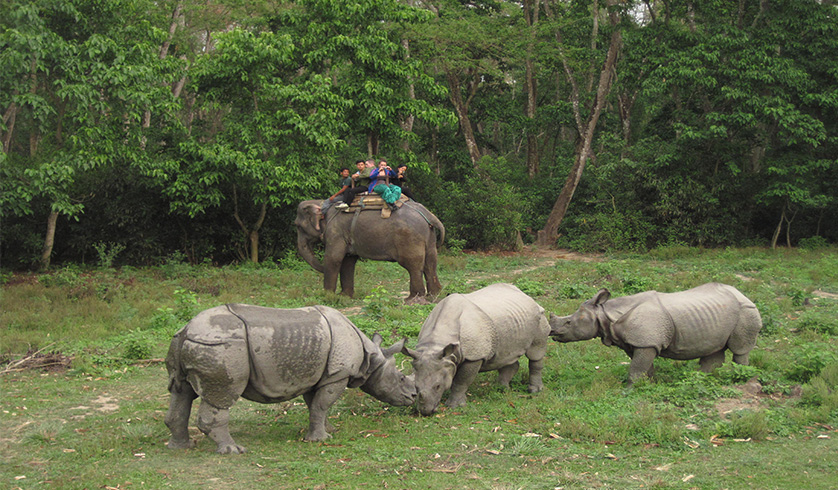 Chitwan National Park, sited in the subtropical Inner Terai lowlands of south-central Nepal in the districts of Nawalpur, Parsa, Chitwan and Makwanpur is the first National Park in Nepal. It is one of the best conservation areas in entire Asia with a wide range of wildlife and vegetations including some of the threatened and extinct species. Chitwan National Park covers an area of 952.63 km2 (367.81 sq mi) and is enlisted as UNESCO World Heritage Site since the year 1984.

The protected area has become one of the best tourist-hubs for nature and wildlife lovers being the habitat for more than 700 species of wildlife including the endangered creatures like one-horned rhino and Bengal tiger along with 543 species of birds, 68 species of mammals and 17 species of snakes, starred tortoise and monitor lizards. Besides, the Chitwan National Park is also home to Himalayan subtropical vegetations including beleric, rosewood, axlewood, elephant apple, grey downy balsam and many more. It is claimed that there are still numbers of flora and fauna left to survey in this national park. 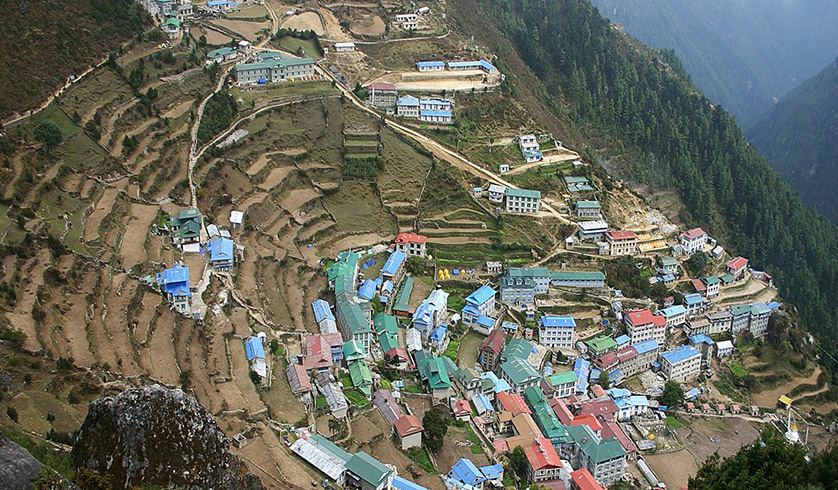 Sagarmatha National Park in the Himalayas of eastern Nepal is an incomparable national park which features the creation’s uppermost peak Mount Everest, known as “Sagarmatha” in the local language. It covers an area of 1,148 km2 (443 sq mi) in the Solukhumbu district and outspreads in altitude from 2,845 to 8,848 m (9,334 to 29,029 ft) at the crest of Mount Sagarmatha. Established in 1976, the Sagarmatha National Park has became Nepal’s first national park that was listed as a Natural World Heritage Site.

An awe-inspiring area with breathtaking massifs, glaciers, profound gorges and seven mountaintops over 7,000m apart from Mount Everest, the Sagarmatha National Park is habitat to numerous atypical species such including the Snow-Leopard, Musk Deer, Himalayan Black Bear and Red panda. Whereas, a variation of vegetation can be seen in this region with the change in the altitude. Moreover, more than 3,500 Sherpa people living within the park has mingled the natural aspect along with the richness in culture which allures the tourists. Sagarmatha National Park, hence, is an important area for preserving nature, culture and ultimately the mountain tourism. 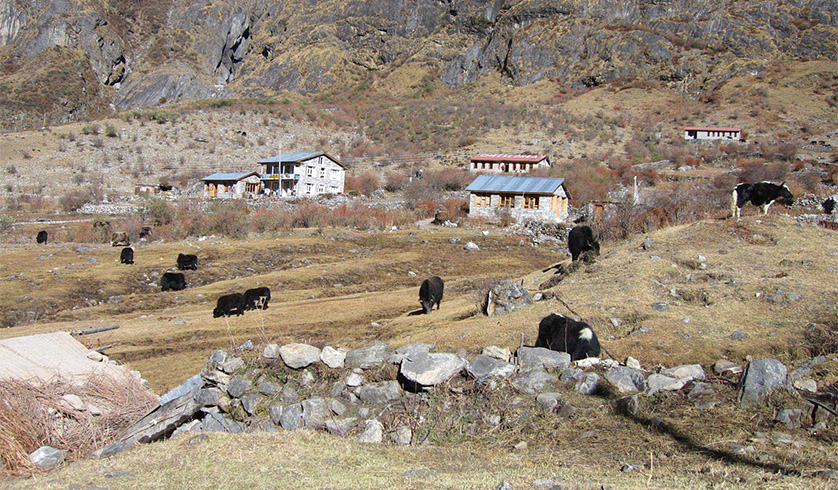 Established in 1976, Langtang National Park is the Nepal’s first Himalayan National Park and the fourth protected area. The national park is comprising of an area of 1,710 km2 (660 sq mi) in the Nuwakot, Rasuwa and Sindhulpalchok Districts of the central Himalayan province enclosing 26 village communities surpassing an elevation scope of 6,450 m (21,160 ft). Langtang National Park also features the holy and spiritual Gosaikunda Lake which is a sacred lake and a major tourism hub at an elevation of 4,300m (14,100ft) above sea level. This national park also features high passes like Langtang Lirung and bounded by everlasting rivers, Bhote Koshi and Trishuli.

Being easily accessible from the capital city, Kathmandu, makes this national park a topnotch choice for travelers with limited vacation and unlimited desire to explore. With a varied range of flora and fauna including 14 vegetation types in 18 ecological classes, ranging from upper tropical forests below 1,000 m (3,300 ft) m altitude to alpine scrub and perennial ice, Langtang National Park also features several threatened species of wildlife and birds as well. Besides, the national park is also a great destination to expose the authentic lifestyle and culture, especially Tamang. Langtang National Park influences tourism in Nepal with the great intermingling of nature, culture and adventures. 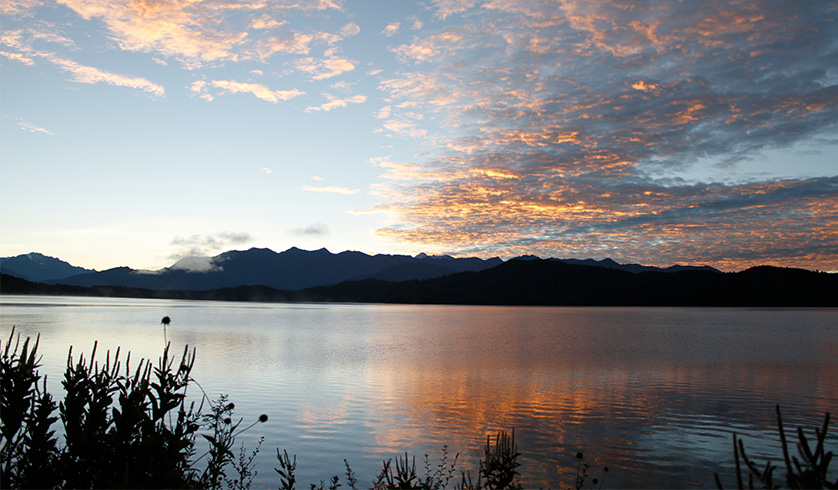 The smallest national park of Nepal, Rara National Park was established in 1976 which encompasses an area of 106 km2 (41 sq mi) in the Mugu and Jumla districts ranging from the elevation of 2,800 m (9,200 ft) to 4,039 m (13,251 ft). The major attraction of this national park is the exceptional Rara Lake which is really outstanding and situated at an altitude of 2,990 m (9,810 ft). But that’s not the only lure, the park has been preserving unique flora and fauna of the Humla – Jumla region along with the rich culture of the locals. The vegetations of Rara National Park includes more than a 1,000 specia 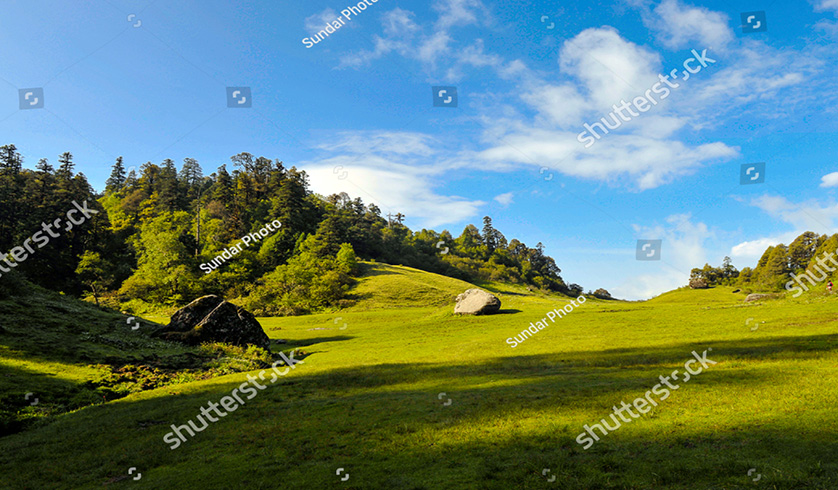 Khaptad National Park was established as a protected area on the recommendation of highly praised Khaptap Baba – a saint who lived and explored this region, in the year 19841. Situated at the union of the districts of Bajhang, Bajura, Doti and Achham encompassing an area of 225 km2 (87 sq mi) and ranging in altitude from 1,400 m (4,600 ft) to 3,300 m (10,800 ft), this national park signifies the central mountain environment, flora and fauna as well as it is a very important national park in terms of religious view. Triveni, Khaptad Dah, Sahasraling and many holy and spiritual places are situated in the Khaptad National Park where thousands of pilgrims gather at religious festivals like Ganga Dussehra and Janapurnima to fill the fair. Moreover, the Khaptad National Park is also home to wild animals, birds and vegetations including Ratuva Deer, Musk Deer, Ghouls, Leopards, Wild Dogs, Wild Cats, Red Monkeys, Langur Monkeys, as well as Danphe – the national bird of Nepal, Munaln etc. 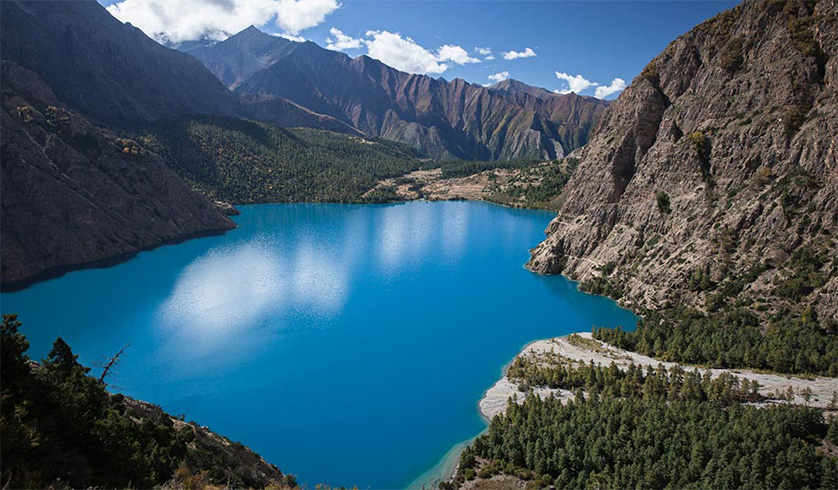 The national park is habitat for varieties of species of flora and fauna which includes some of the rare vegetations like Pine, Walnut, Willow, Oak, Poplar and Cypress in the lower altitude and Spruce, Juniper and Birch at the higher elevation. Shey Phoksundo National Park is home to diverse range of wild animals like Snow Leopard, Wild Dog, Marmot, Weasel, Mouse Hare, Rhesus Monkey, Musk deer, Ghoral, Sheep, Himalayan Black Bear, Himalayan Thar and Jackal. As per the current survey, more than 200 species of birds have been observed in the park along with 6 species of reptiles and 29 species of butterfly.

The scope of tourism is high in this national park due to presence of holy and spiritual pilgrims sites including the Shey Gompa. As well as, the stunning sceneries of the mountains from within the Shey Phoksundo National Park is beyond words. The authentic lifestyle of the people which is alike Tibetan adds more charm to the tourists and is without a doubt the best mingling of nature, culture and adventure activities. 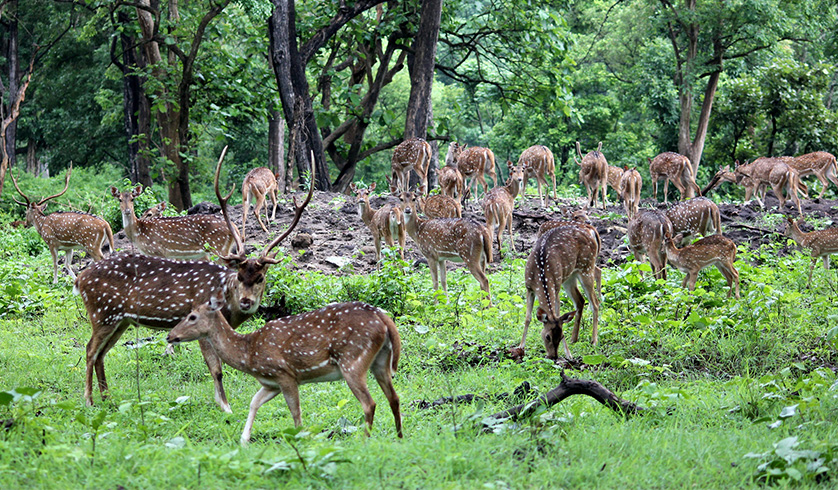 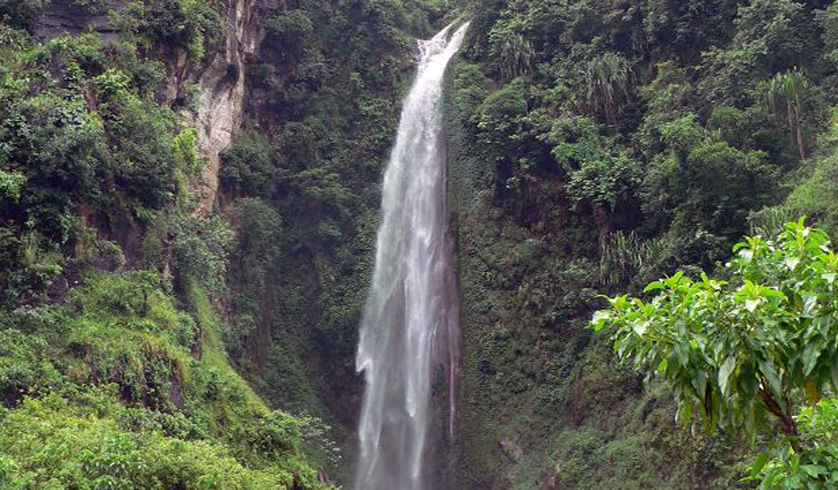 Shivapuri Nagarjun National Park, established in 2002 is the ninth national park in Nepal which is located at the mid-hills on the northern fringe of the capital city, Kathmandu. The park got it’s name after the featuring peak, Shivapur(2,732 m. / 8,963 ft.) and it encompasses an area of 159 Km2( 61 sqmi) in the 3 primary districts of Nepal: Kathmandu, Nuwakot and Sindhupalchowk adjoining 23 VDCs. The Shivapuri National Park is a prominent area for the nation since this national park has always been an important water catchment area, supplying the Kathmandu valley with billions of liter of water several hundred thousand cubic liter of water daily. In 1976, the area was established as a protected watershed and wildlife reserve. Besides, it is also an important part of nation for the tourism since it is consisting of several historical and religious sites as well as is home to some of the well-known trekking routes. Shivapuri Nagarjun National Park is preserving diverse range of species of flora and fauna including some of the threatened ones. 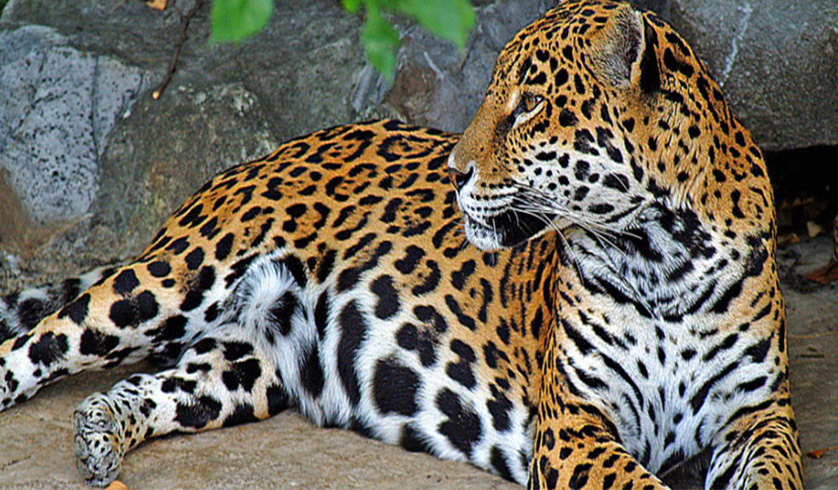 Banke National Park is the tenth national park of Nepal which was established in the year 2010 and is located at the Mid-western Nepal covering an area of 550 km2 (210 sq mi) with most parts falling on the Churia range. This protected area is habitat for the minimum of 113 tree species, 107 herbal species and 85 shrub and climber species along with rare faunas like tiger and four-horned antelope. An interstening fact of the Banke National Park is that, a ruddy mongoose was recorded for the first time in the protected area during the year 2014. 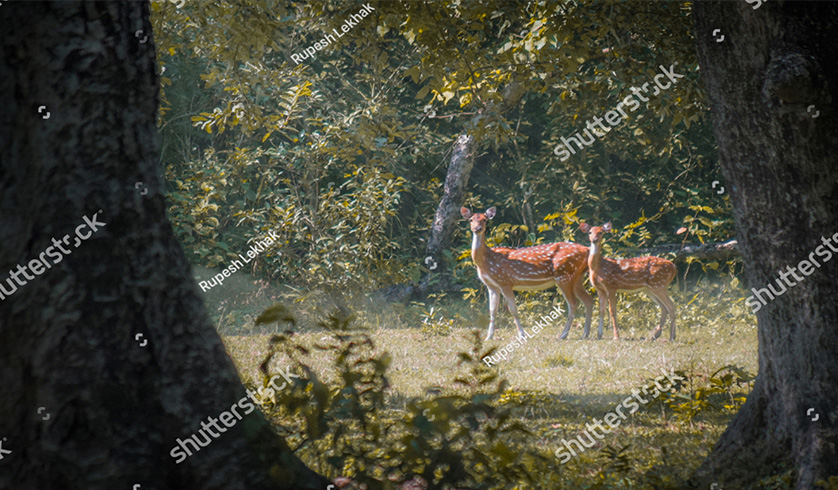 Situated in the Far-Western Development Region of Nepal covering an area of 305 km2 (118 sq mi) of open grassland, forests, riverbeds and tropical wetlands at an altitude of 174 to 1,386 m (571 to 4,547 ft), the Shuklaphanta National Park was established initially as Royal Shuklaphanta Wildlife Reserve in the year 1976.

The park is named after one of the grasslands found inside this protected area called Sukla Phanta which is the largest patch of continuous grassland in Nepal covering an area of about 16 km2 (6.2 sq mi). Shuklaphanta National Park is a habitat to more than 700 species of flora along with a wide range of faunal species. It has contributed hugely in the promotion and development of tourism in Nepal since it’s establishment. 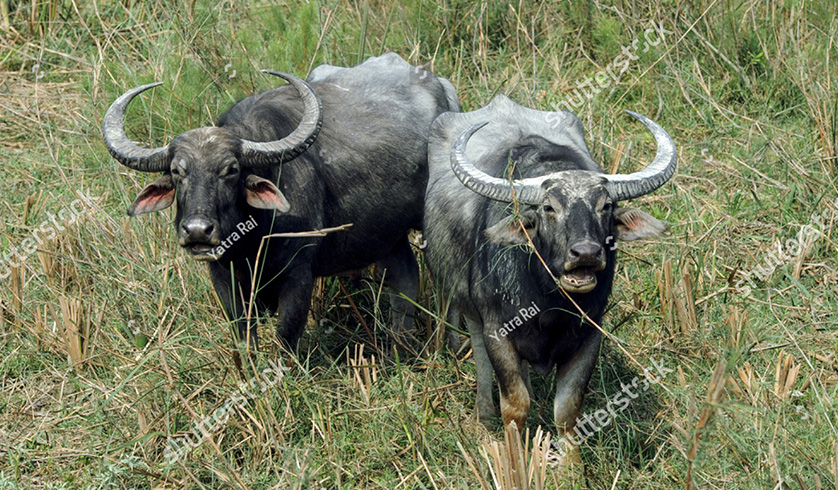 Initially established as a wildlife reserve in 1984, the Parsa National Park is a protected area in the Inner Terai lowlands of south-central Nepal; afore being transformed into a protected area, the region used to be a hunting ground of the ruling class in Nepal. It expands through an area of 627.39 km2 (242.24 sq mi) in the Parsa, Makwanpur and Bara districts and ranges in altitude from 435 m (1,427 ft) to 950 m (3,120 ft) in the Siwalik Hills. Parsa National Park is attached with Rapti river and Siwalik hills as well as the renowned Chitwan National Park and hence, it is a major tourist hub in Nepal.

More than 919 species of flora have been estimated to have found in the Parsa National Park which includes 298 vascular plants, 234 dicots, 58 monocots, five pteridophytes, and one gymnosperm. Whereas, the park is also home to several species wild animals and birds including the rare Bengal Tiger.

Why to choose NMT?

With the prime motto of, “Safety, Success and Satisfaction”, NMT ensures our clients would acquire the best of our services.

While you make an inquiry or book a trip with NMT, we always provide the exact cost quotation mentioning where each of your pence would be spent.

Nepal Mountain Trekkers is a legally registered trekking company in Nepal that is affiliated with the Ministry of Tourism, NTB, TAAN, and NMA.

NMT uses environment-friendly equipment and bio-products as well as runs a timely campaign to provide awareness for the conservation of the environment.

We are insured. Are you?

To prevent unwanted and unexpected risks that are beyond our control; we have insurance cover for all our staff. And we do recommend all our clients to get insured with the best insurance policy before traveling.

Own Accommodations, Transportation and Equipment

Nepal Mountain Trekkers is a huge enterprise that owes its own accommodations and transportations for the ease of our clients.

Nepal Mountain Trekkers facilitate our clients with the flexibility to customize the trip itinerary and dates as well as services to be included. You can choose any of our packages and personalize it according to your requirements.
View all